Why St. Canice’s? – St Canice was born almost fifteen hundred years ago in 516AD at a place known as ‘Cianacta Glinne Geimin’. That place we now know as Dungiven.

Although our club, St. Canice’s was founded way back in 1936 there is firm evidence that gaelic games were played in Dungiven over a century before that.

The first record of Gaelic Football played by a Dungiven team was a match on the 9th April 1922. The game was against Creggan (from Faughanvale Parish). The Dungiven team of that time played under the name of John Mitchel’s G.F.C. and they clinched the North Derry League that year.

After a few years there was a dormant period but during the mid 1930’s there was a resurgence of local interest in Gaelic Football. The local curate Father Colm Mc Goldrick who in 1936 was made chairman of the refounded North Derry Board encouraged the Dungiven Club to regroup. Consequently a meeting was called in May 1936, in Mc Kenna’s store (Groogans Lower Main Street) to set up a club. A committee was elected: Chairman – Fr. C Mc Goldrick, Secretary – G. Mc Closkey and Treasurer – P. Conway.

Bob Hasson kindly donated £5.00 cash to buy jerseys. A set of green and gold quarters jerseys were bought. Matches were played on a field belonging to Joe O’ Neill which was situated on the Garvagh Road about one mile from the town. In 1936 two major games were played in this field a County Final between Loup and Park and a County match between Derry and Fermanagh. St Canice’s Hall was used for social events of the club, ceilidhs etc.

On May 27th 1937 St. Canice’s defeated O’Connor’s Limavady, at Claudy Green to win the Kerlin Cup. Dungiven 3-3, Limavady 1-8, the winning point was scored by the captain Frank Mc Closkey from a ‘50’. The club acquired Farrens field to play matches ie. Where Mitchel Park is now situated. This pitch was more convenient to the town. 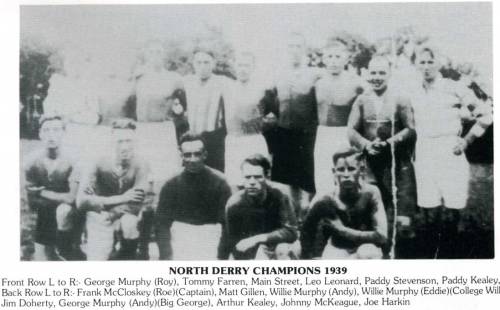 Father Mc Goldrick was transferred to Ballinascreen in 1938 and Gerry Mc Closkey took over as Club Chairman, a position he also held in 1939. In 1939 Dungiven won the North Derry Championship, beating Limavady at Drumsurn 1-4 to 0-2. On this occasion Leo Leonard in goals was the star of the game, pulling off several spectacular saves. Dungiven had reached their first ever County Final, the opposition being provided by Magherafelt. Unfortunately St. Canice’s were defeated on the day at Ballinascreen by 3-7 to 1-2.

In Sept 1939, with England’s declaration of war and the subsequent upheaval world wide, football locally was forced to take a back seat. Many goods became rationed, petrol in particular became very scare. Added to this, there was a large presence of troops stationed in and around Dungiven. The local upheaval resulted in tremendous pressure on the club and sadly in 1939 they were forced to fold.

However the period of inactivity was short lived when in late 1943 a small group of young enthusiasts set about revitalising the club. A meeting was held in the primary school and Master Aiden Hegarty was elected as Chairman, Secretary – Charlie Hasson and Treasurer – Robbie Hasson. Dan Mc Closkey provided a set of jerseys – black and white vertical stripes. George Mc Closkey was the manager. A few friendlies were played.

St. Canice’s G.A.C re-affilated to the North Derry League in 1944. In 1945 they won the North Derry Championship beating Magilligan. However they were beat in the County Final by Newbridge. 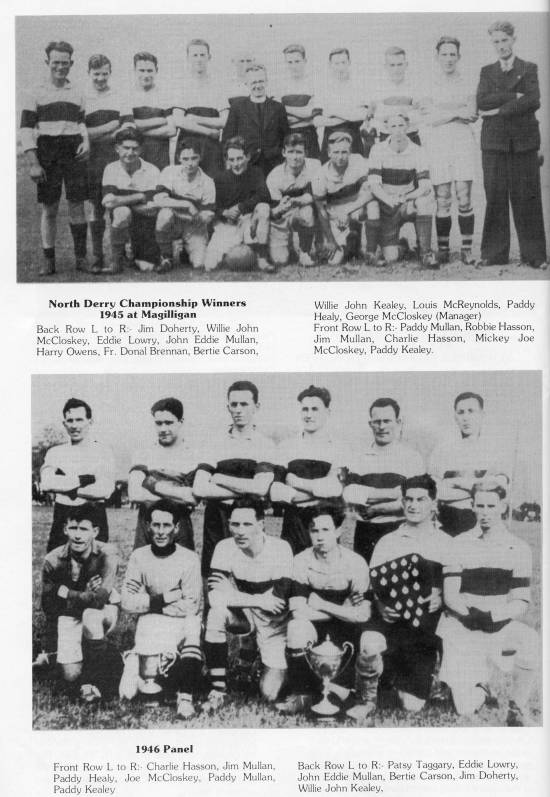 In 1947 St. Canice’s won their first County Senior Championship they beat Drum in the North Derry Final, by a score line 0-3 to no score. On the 15th Sept 1947 Dungiven beat Lavey 2-8 to 2-3 to win the County Championship. 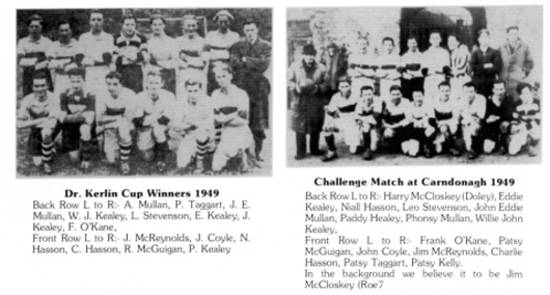 In 1950 Joe Beatty was elected Chairman this was to be the first of a  record breaking twenty-one consecutive years in the chair. Joe came to Dungiven in 1928 he hailed from  County Fermanagh.

1951 was a memorable year for the St. Canice’s Club we won our second County Senior Championship at the expense of Bellaghy 1-9 to 4-3. The same year we won the North Derry League and Championship and also won the Dr. Kerlin and Neal Carlin Cups. 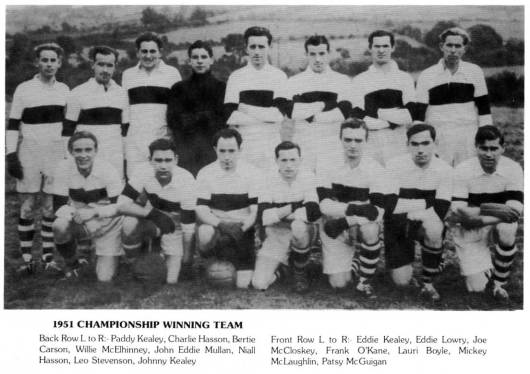 In 1952 Dungiven were again crowned North Derry Champions we defeated Magilligan in the Final. However we surrendered our County crown at the Semi-Final stage to Desertmartin 2-5 to 0-3. Sadly this was to signal the end of an era for St. Canice’s Seniors and we were not to contest a County Final for the remainder of the decade. We were still strong in North Derry Football during this period. 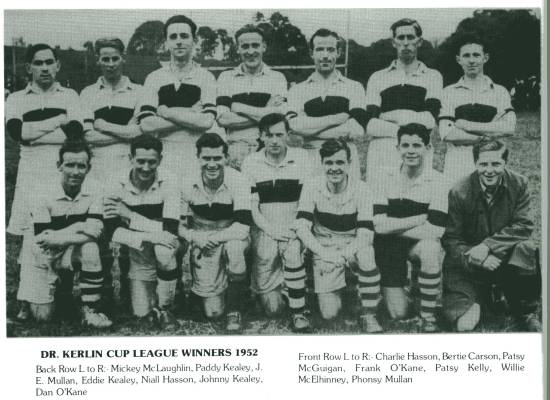 On the 1st August 1953 negotiations commenced and a price of £800 was agreed with Harry Deeny to buy the field (Pat Kane’s) which is our present O’ Cahan’s Park. The Pitch was opened on Sunday 29th June 1957. 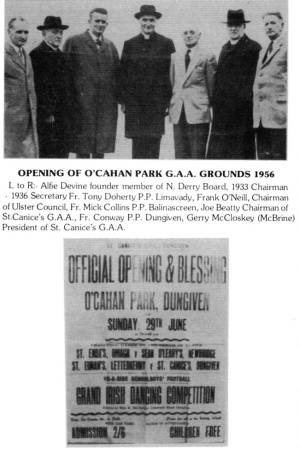 1955 and 1956 were years perhaps more memorable for Minor football.The Minor team won the North Derry Minor Championships in both seasons. They lost the County Minor Semi-Final  in 1955 to an excellent Bellaghy team and won the 1956 Final at the expense of Kilrea/Swatragh 0-4 to 2-5. 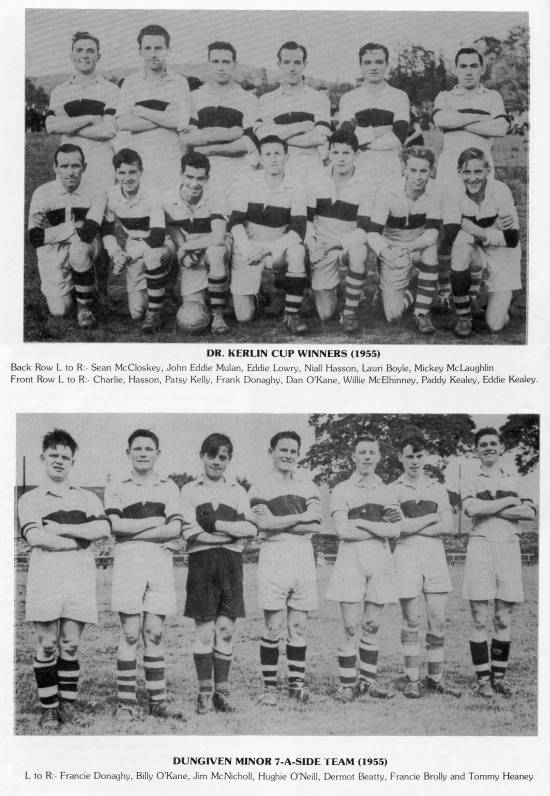 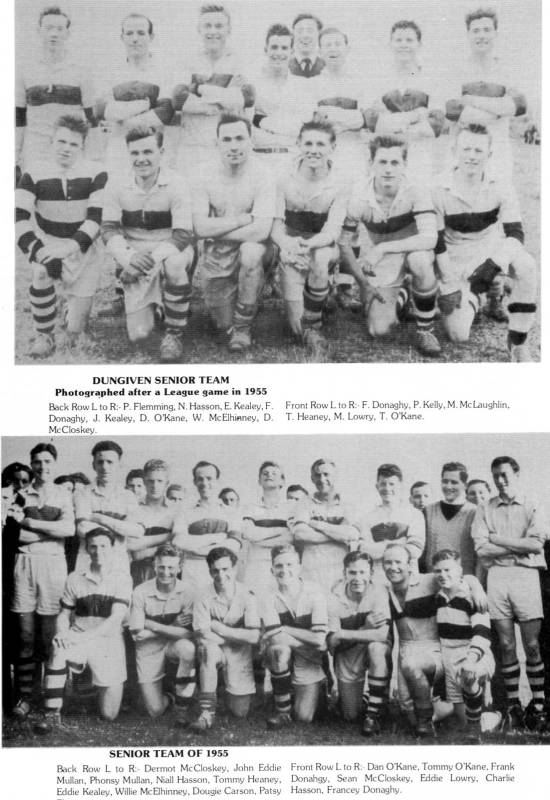 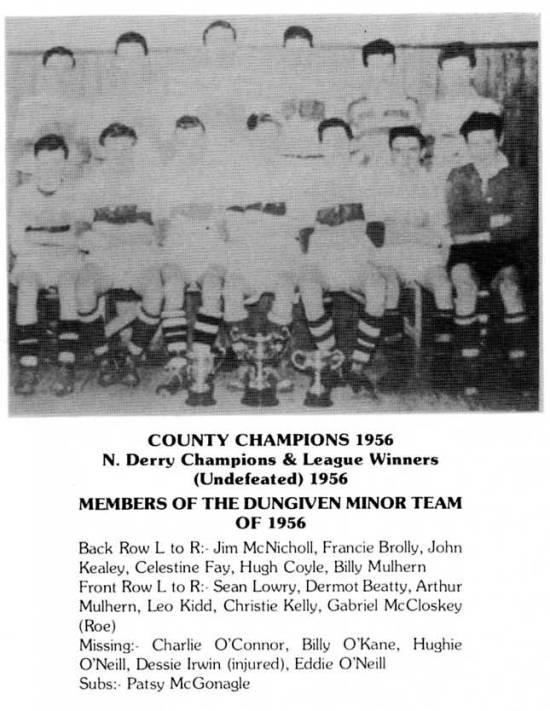 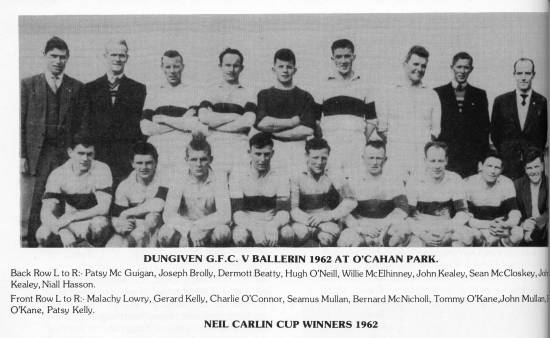 In 1963 after a disagreement with the North Derry board, the club withdrew from all North Derry Competitions. The Senior team still played in the Championship. Underage football suffered and many players went to play with neighbouring clubs. This brought to an end the great run of underage success. 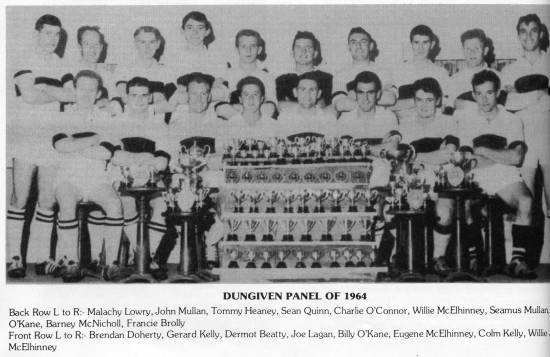 In 1965 Dungiven came back to North Derry football at underage level but the Senior team continued to play in South Derry Competions. At County level Derry Minor Team created a piece of history by winning an All Ireland for the first time ever. Anthony Burke from our club was a member of this team. 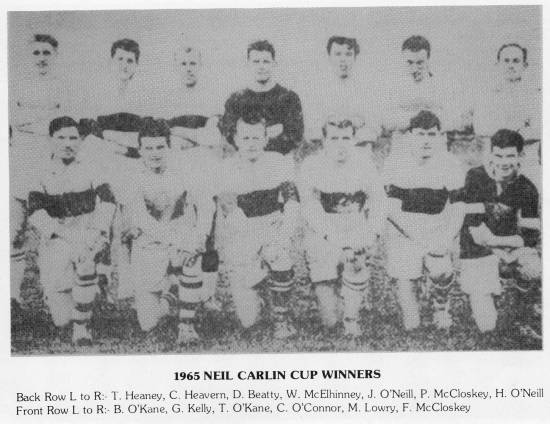 In 1966 Dungiven reached the County Minor Final after defeating Ballerin in the North Derry Final, only to be disqualified on a technicality. The Senior’s played Newbridge in the County Final but were beat 2-10 to 0-3. 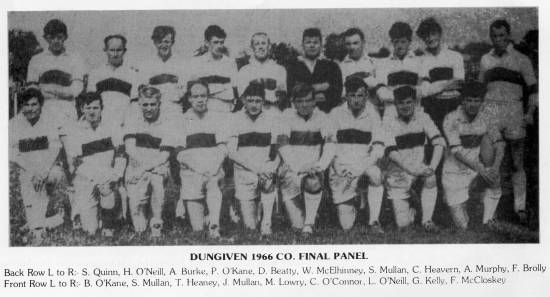 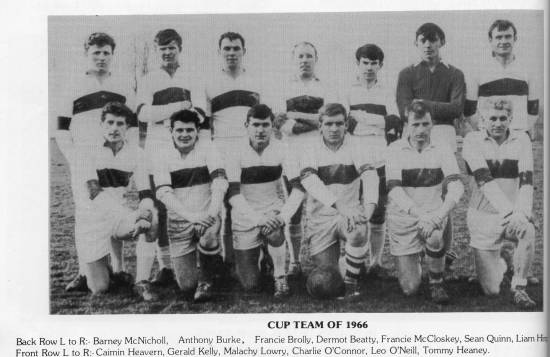 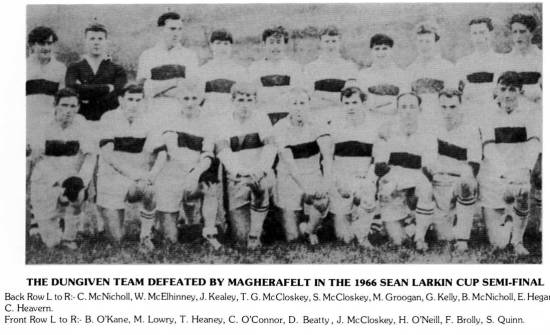 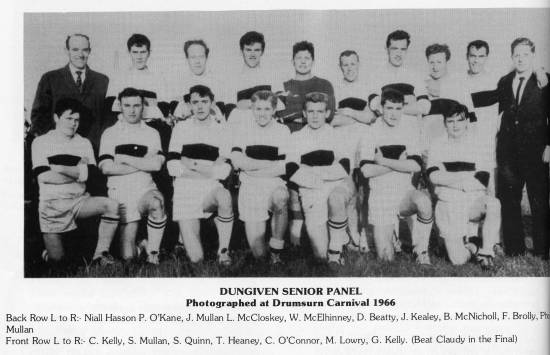 In 1967 Dungiven were relegated however the following year they won promotion again. The arrival of John Somers as a top class goal-keeper was to prove very significant. He was later chosen at county, interprovincial and All-Star level and is undoubtedly one of the best ‘keepers’ of all time.

Although never reaching the ultimate goal of winning the County Championship in the 70’s they came close in 1976. It was indeed a decade of mixed fortunes with Dungiven’s better results attained in the second half of the 70’s (reached the Final in 1976 but reduced to taking part in the Intermediate Championship in 1972).

In the 1972 and 1973 seasons St. Canice’s were undefeated in their League games. 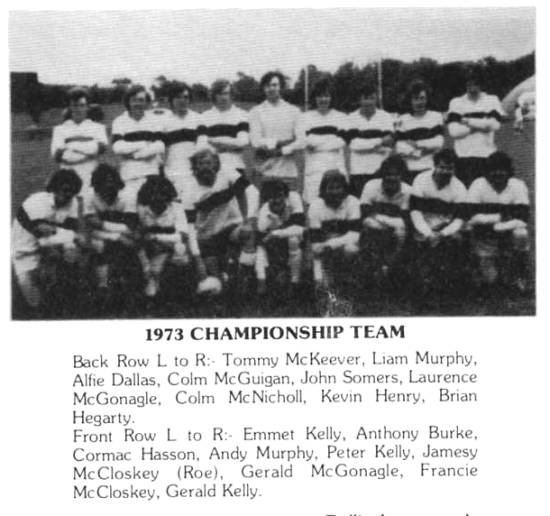 In 1978 Dungiven reached the Under 16 Final for the second successive year, we played Magherafelt at Swatragh. We won 1-5 to 0-4. The Reserves won their first title this year by defeating Ballinderry by a single point. 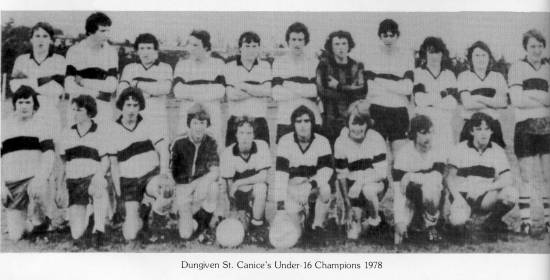 In 1979 Dungiven won their third Under 16  Championship title in a row by beating Ballinderry 5-5 to 2-1. We also bridged a twenty three year gap  by beating Bellagy 1-6 to 0-7 to win the Minor Championship. 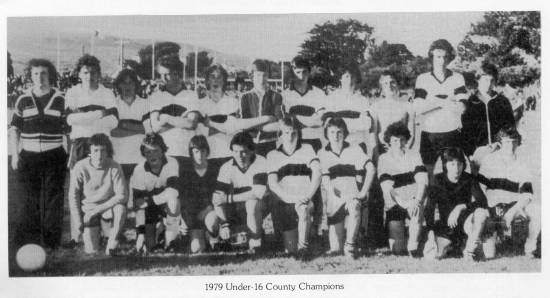 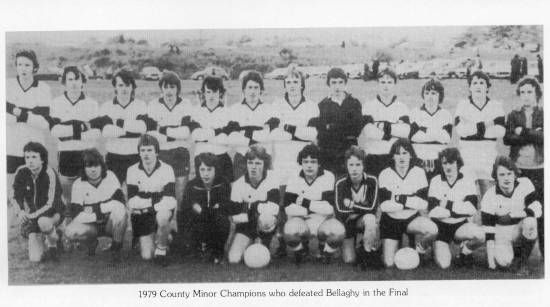 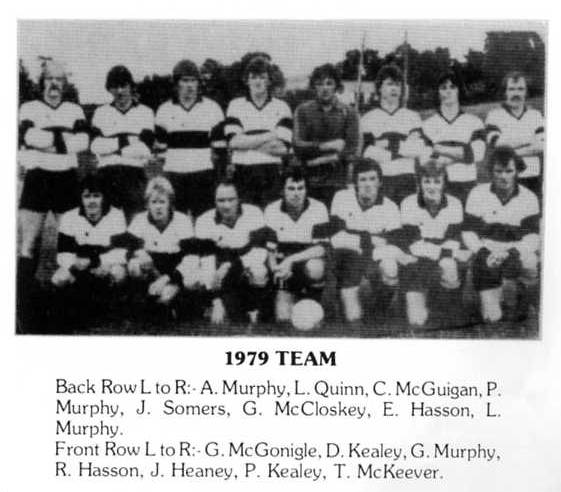 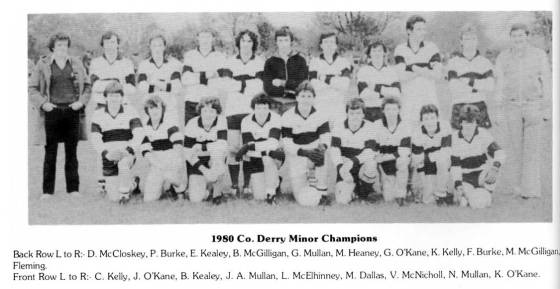 In 1982 Dungiven Senior’s played in the County Championship Final against Ballinderry, it ended in a draw1-7 to 1-7. The replay probably remembered best for the extremely physical nature of play ended with both teams level 3 points a piece. Extra time was played and Ballinderry won on a score line off 0-7 to 0-5. The aftermath to the 1982 County Final was to be costly to both Clubs. The Derry County Board decided that both clubs must be disciplined for ‘gross misconduct on the field’ and the punishment meted out to Dungiven was a six month suspension. This measure was to have harsh repercussions as it meant that St. Canice’s were unable to complete their league programme and this resulted in the Senior team being relegated from the Premier League. Two Underage  County Titles came to Dungiven in 1982. The Under 14’s beat Glen convincingly 3-6 to 1-1 in the Final. At Under 16 level Dungiven beat a highly fancied Lavey team at Swatragh by 2-3 to 0-4. 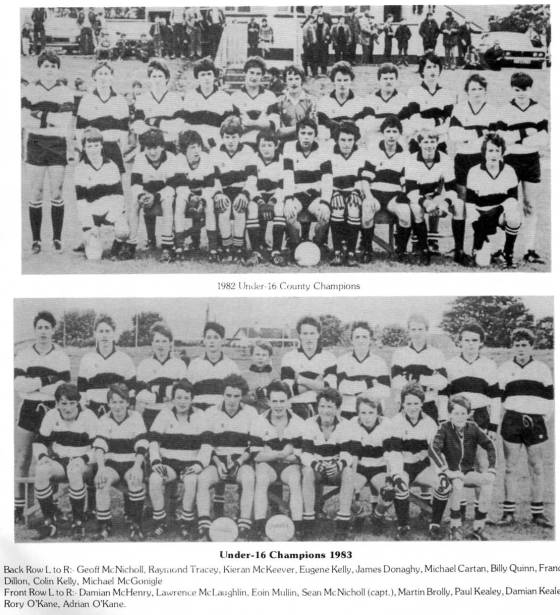 However in 1983 St. Canice’s  Seniors bounced back. The battle for league honours developed into a ‘three horse race’ between Glenullin, Ballinderry and Dungiven and it was obvious from the early stages that every point was vital. Indeed so keen was the competition that the placings were not decided until the very last game when Dungiven defeated Glenullin to clinch the title. In the Championship Semi – Final Dungiven left it very late to snatch the equaliser as the teams drew Dungiven 1-7, Bellaghy 0 –10. In the replay at Swatragh, Dungiven outplayed the Blues in all departments to win by a three point margin, 0 – 8 to 0 –5. St Canice’s were back in their second successive County Final, this time facing the Rossas, Magherafelt at Ballinscreen and in an amazing Final snatched the title from Magherafelt’s grasp in the dying minutes of the game. At last a thirty two year gap had been bridged and Dungiven had won their third Senior Championship. In 1983 St. Canice’s also won the reserve Championship defeating Ballinderry by 2 – 8 to 0 – 8 at Ballinscreen – quite a unique double. This was the Reserves fourth success in six years. The Under 16’s played Ballinderry at Ballinscreen in the County Final they built up a big half-time lead, then held on grimly in the second half as the Shamrock’s made full use of the wind. Final score Dungiven 3-4, Ballinderry 3-3. 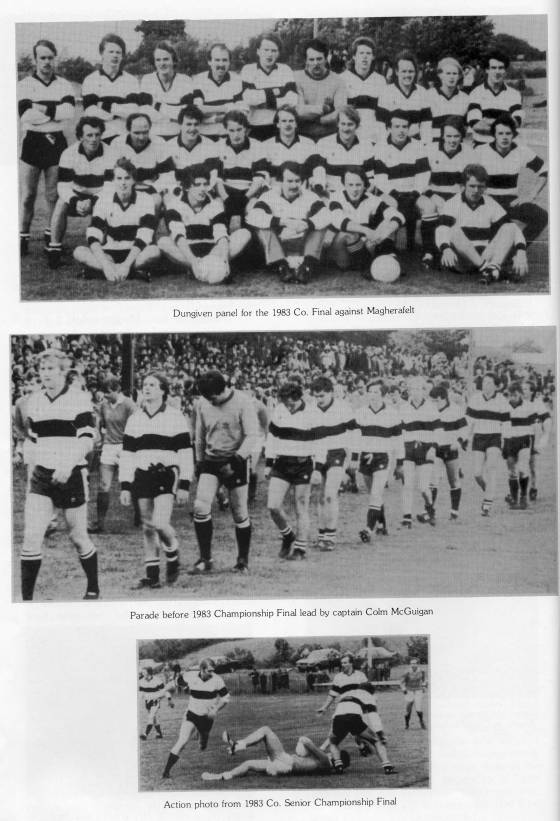 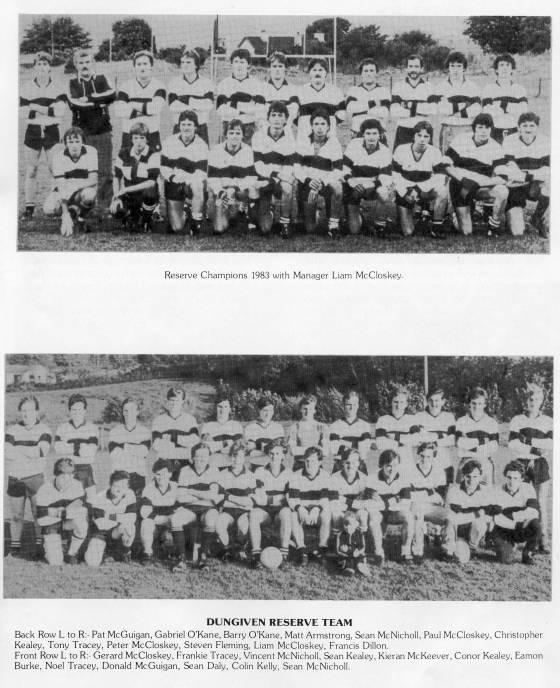 In 1984 St. Canice’s won their fourth Senior Championship. In the Centenary County Final St. Canice’s played Castledawson at Greenlough. Dungiven entered the game as firm favourites as Castledawson were appearing in their first Final in twenty years, but Castledawson gave early notice that they were going to be no push – over. Dungiven won by the slenderest of margins. 0-9 to 0-8. 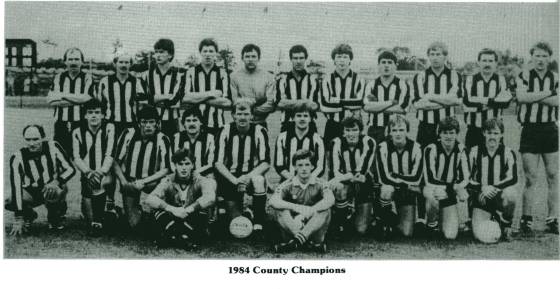 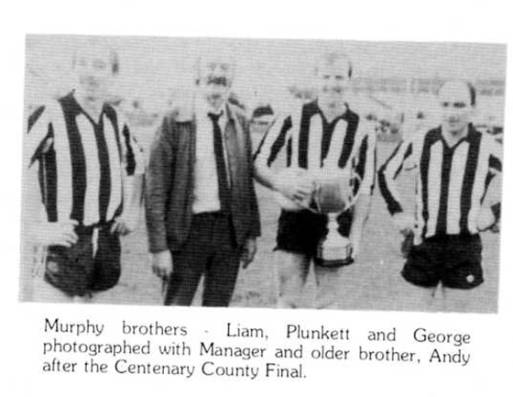