Our Senior Team lost to Glen in the Derry Senior Championship in Owenbeg on Saturday afternoon. A crowd of around 2,500 saw us crash out at the first stage.  It was a disappointing end to a largely disappointing season.

Our Minors edged a tightly contested affair against Bellaghy on Monday evening.  Bellaghy rocked Dungiven early on with a Damon Gallagher goal within 20 seconds of the throw in. Dungiven looked nervous throughout the half and Bellaghy went into the break with a 1-6 to 0-5 lead.  In a much improved second half performance, which got off to the start we needed with Feargal Higgins hitting three unanswered points immediately after the restart, Dungiven played their way back into contention.  In the last ten minutes Conor Kelly, John Mullan and Feargal Higgins added points to see us home on a score-line of 0-14 to 1-08.

Our U16s face Magherafelt in the semi-final of the Championship this Thursday evening – after a great result against Lavey in the last round we need to make sure we carry this performance and momentum into this tough semi-final.  Best of luck to players and management.  As in the last round, we’d be delighted to see a good travelling support to help push the lads on – venue will be announced via social media when known.

Our U14s suffered a heavy defeat in their Championship match with Bellaghy in Slaughtneil on Tuesday evening – on a great evening for football Dungiven were right in this game at half time.  Despite being 5 points down on the scoreboard Dungiven hit the second half knowing they had created plenty of chances and must still be in with a shout of causing an upset.  However, two missed goal chances early in the second half proved costly, as almost immediately Bellaghy added 2 goals and 2 points without reply.  A second goal from Dungiven still left 10 between the teams, and this deficit was always going to be too much as Bellaghy started to play with confidence against our deflated lads.  It’s always hard to see out a game when the scoreboard is so heavily against you, but our team deserve credit for playing to the whistle.

This defeat brings the U14 season to an end, but anyone who has charted the progress over the season will know that this team showed great improvement throughout the year.  Thank you to the U14 Management team of Francis, Paul, Gareth and Mickey, thanks to all the parents who supported the team all year, and thank you especially to all the players who showed great dedication and commitment in all training sessions and matches.

Our U12s enjoyed a great trip to Dublin on Tuesday where they got to play in Headquarters – well done to all of the boys who made the trip down…..you’ll always be able to say you played in Croke Park lads!  In the U12 League we played Slaughtneil on Saturday and put in a strong team performance in a very tight low-scoring game. 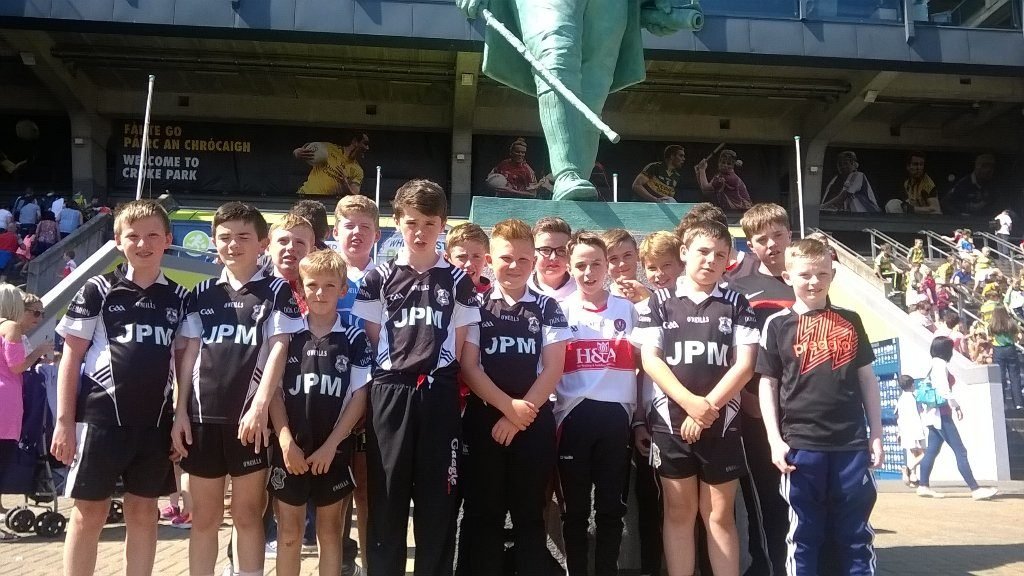 Our U10s had a busy weekend as they travelled to Buncrana on Saturday to compete in the Sean Masterson Tournament.  Both our teams played exceptionally well to reach two finals, but were unfortunately beaten by very strong opposition.  On Sunday we hosted the final GoGames blitz of the season in Owenbeg – travelling teams were Ballerin, Faughanvale, Gelnullin and Lavey.  As we’ve come to expect, there were some fantastic performances from our lads in all games.  One more time, thanks to all parents for your continued support.

Please note, after a bit of a rest for our U8s, there are two training sessions this week, on Tuesday and Thursday, starting at the earlier time of 6:30pm.

Our U6s were to resume training this week, but due to unforeseen circumstances it has been postponed this week and will now start back on Thursday 1st September.

There will be a General/Executive Committee Meeting on Monday 22nd Aug at 8:00pm sharp.

We would ask everyone to support us in our Lucky Dip draw in aid of Páirc na nÓg Car Park & Changing Facility – choose your tickets carefully though, as the price of your ticket is based on the serial number in those sealed envelopes – there are 2,000 tickets, all with a unique price, priced from £0.01 to £20.00.  Whatever the price of your ticket, you stand a chance of winning the £3,000 top prize on 18th September, with 5 other prizes from £1,000 to £100.  We’d especially ask the parents of our Underage teams to support us.  Thank you and best of luck

Thank you to everyone who supports us with this life-blood fundraiser for our Club – thanks also to all of our loyal and committed collectors and helpers.