Dungiven Seniors suffered defeat to Bellaghy in O’Cathain Park on Sunday afternoon.  In the preceding game our Reserves recorded a high-scoring and comfortable victory against the Bellaghy Reserve team.

Some of our Minor players travelled to play in Ardboe’s inaugural Féile Frankie 7’s competition on Saturday.  We started strongly and won all the group games and quarter-final, eventually losing in the semi-final to the host team and competition winners Ardboe.  It was great run out for our lads, with the younger players taking the chance to impress.  Thanks to Ardboe for the invitation.

Our U14s got back to winning ways with a fairly comfortable victory at home to Slaughtneill on Tuesday evening.  This was a solid performance, albeit against a visiting team that has been struggling in the league.  Apart from a 10-minute period just before half time, Dungiven were pretty-much always in control of the ball.  This was a good team performance and although a tough task awaits them as they travel to top-of-the-table Ballinderry on Tuesday night, they should feel confident that they’re improving week by week.  Well done lads.

Our U12s had two league games this week, unfortunately coming out as losers in both.  A Team: In a disappointing performance we lost at home to Glen on Monday night.  Although also beaten in Glenullin on Friday night, it was a much-improved performance, and the team was unlucky to leave without at least a share of the spoils. B Team: our B Team performed strongly and won both games so congratulations to them.

This week’s Lotto numbers will be drawn on Monday 13th June.

Thank you to all of you who take part in our Club Lotto every week – your continued support for this main fundraising initiative is greatly appreciated.  Thanks also to all of our loyal and committed collectors and helpers.

The Euro’s have started, with the various sweeps and the craic that goes with them, so there’s plenty of matches to watch over the next few weeks.

We’re running promotions in the Sports Bar for each of Ireland’s 3 group games – Mon 13th, Sat 18th and Wed 23rd.  Don’t miss out. 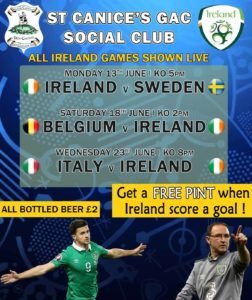 The ever-popular Jim Millar will be playing in the Lower Bar this Saturday night (18th June).