Our Senior team suffered a fourth consecutive defeat in the league, at home to Swatragh on Friday night.  Whilst we had more than enough chances to get something from this match our inability to take our scores is costing us dearly.  Despite having the bulk of possession in the first half it took 25 mins for us to register our first score, and this was after two gilt-edged goal chances had been missed.  We finished the half strongly and despite trailing at the break seemed the more likely team to take the points.  A scrappy first period of the second half seemed to suit Swatragh, as Dungiven were unable to find any positive momentum.  The visitors made the best play from then on and made it count on the scoreboard, eventually running out convincing and deserving winners against a deflated Dungiven team.

The Minors were at home to Swatragh this week. We started very slowly with Swatragh dominating the opening twenty minutes and taking an early lead, which was increased when we conceded a goal from a penalty. Gradually we began to exert our influence to lead by 3 points at half time. In the second half we began to pull away as Swatragh began to tire, enabling us to give the majority of our panel some game time.

Out U16s suffered another defeat at home to Ballinascreen on Thursday night.  Whilst Dungiven started well they conceded 2 bad goals and went in at the break trailing by 9 points.  It was really only in the last 10 mins of the match that Dungiven made any impact on the scoreboard, but by that time the Screen lead was unassailable – final score 3-05 to 5-06.

Dungiven U12s A & B teams travelled to Swatragh on Saturday morning to compete in the U12 League.  Despite missing a couple of their players, the A Team competed extremely well in every secotr of the field with some fine individual performances, finishing strongly to come away with a win, score 5-03 to 4-10.  The B Team also put in a good shift battling hard to take away a 2-point victory.  Well done to all players from both clubs, and thanks to Swatragh for hosting.

Our U10s competed in the third GoGames Blitz of the season on Sunday morning in Magherafelt.  There were three very competitive games in each grade versus Ballerin, Magherafelt and Glen.  Despite being under strength all of our lads performed very well.  Thank you to the parents for their continued support.

Congratulations to our 3 winners and thank you to all of you who take part in our Club Lotto every week – your continued support for this main fundraising is greatly appreciated.  Thanks also to all of our loyal and committed collectors and helpers.

Massive congratulations to our very own Pat “Paroe” McCloskey, who was deservedly awarded the Irish News Volunteer of the Year for 2016 at an awards ceremony in Belfast on Friday.  Representing both our own Club and Kevin Lynchs’ Hurling Club, Pat’s huge commitment to our Clubs and our community was recognised with this award.  Pat typifies everything that is good about the GAA community – his dedication and work across a whole range of functions in our Club is unmatched – from lining pitches, washing jerseys, opening and closing gates and doors, umpiring matches, coaching players, selling tickets and loads more, Pat is an ever-present positive influence in so many ways.  Thank you Pat – congratulations on this terrific and well deserved award – we’re all very proud and thankful to have you in our Clubs. 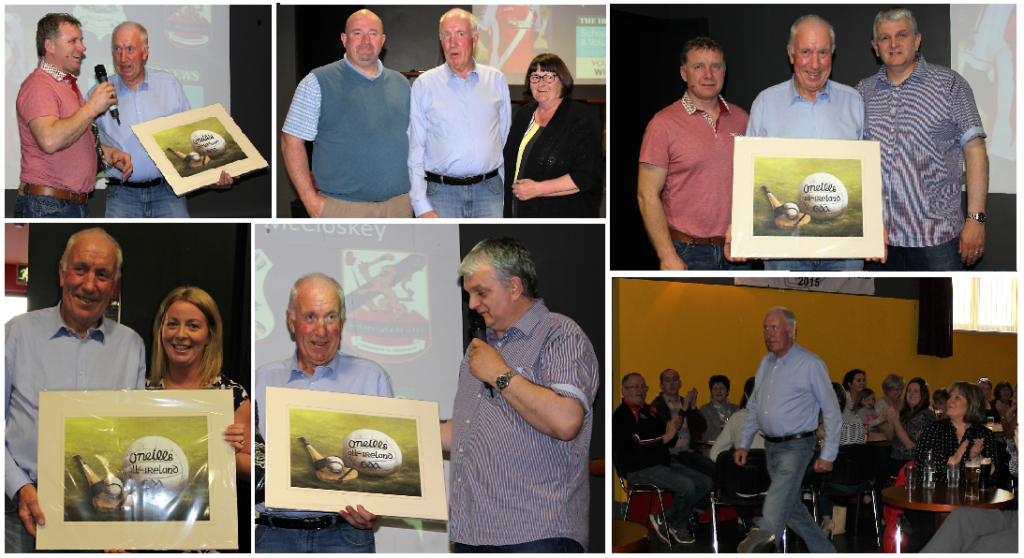 Remember that we regularly show lots of sports on the big screens in the bar – from Monday night football, mid-week league, cup and European matches, and weekend GAA and soccer matches through Saturday and Sunday. Come along, support your teams and enjoy the atmosphere.  Match schedule will be advised through social media later this week.