Our Senior and Reserve teams both suffered heavy defeats on Saturday away to Ballinderry.

The Minors played Lavey at home in the league this week. Despite missing a lot of players due to injury and sickness, we started well and took some very well worked scores against a packed Lavey defence. However just before half time we lost possession after coming out of defence and were left caught badly out of position, resulting in a Lavey goal. The second half was a very close affair and a Lavey penalty and a third goal for them left us two points down with only a few minutes left. A sweeping move the length of the pitch resulted in us scoring a well worked goal to leave us running out one point victors in what was a very well contested game.

The U16s recorded their first league victory of the season with a high-scoring home win against Newbridge on Thursday evening.  Most of the hard work was done early in the game after we scored 3 goals within 15 minutes.  Leading 4-05 to 1-04 at half time, the second half was a tighter affair – final score 5-12 to 2-07. 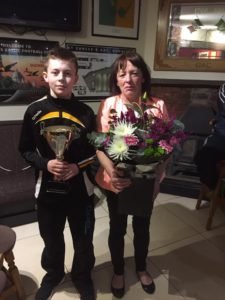 The U14 Player of the Year for the 2015 season was presented on Thursday evening to Caolan Irwin, a deserving and popular winner.  As player of the year Caolan was presented with the Jude O’Neill Cup, in memory of a former U14 player who tragically lost his young life in 1998.  We’re delighted to keep Jude’s memory alive in our Club with this award, and we extend a warm thank you to the O’Neill family for being with us again on the night to make the presentation.  Pictured are Caolan and Mrs O’Neill.

Our U10’s competed in the second GoGames blitz of the season at Páirc Ui Catháin on Sunday morning. Visiting teams were Ballinascreen, Craigbane and Glenullin. There were some fantastic performances from our players in each grade. Thank-you to the parents for their continued support.

Our U8’s had a series of challenge matches on Wednesday night when Bellaghy travelled to Dungiven – another brilliant turnout by our lads.  Thank you to a very impressive Bellaghy team for making the trip across the Glenshane.

Executive Committee Meeting on Tuesday night at 8:30pm.  Note – this is not a combined General Meeting so only Executive Members should attend.

Club membership is now overdue. All players must be members and must be registered/paid-up to be able to train and play.  Due to the insurance/player injury scheme rules this will be strongly enforced across all age groups. Remember that membership can now be easily purchased online at http://www.dungivengac.com/membership-online/ – just click the “sign up now” link.

After building for over 6 months, our £6,000 Jackpot was won last week on Sunday 17th April.  On Wednesday night Brian Mullan and Kieran McKeever handed over a cheque for £6,000 to Richard Service who was the lucky winner.  Congratulations to him. 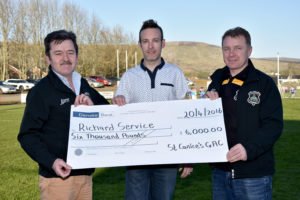 The jackpot has now started again at a healthy £2,500.

From now on the Lotto numbers will be drawn from numbers between 1 and 30.

The committee of St. Canice’s would like to thank everyone who contributes to the weekly club lotto and continues to support the club.

Make the most of your Bank Holiday weekend next Sunday by coming along to the St Canice’s Ladies Football Lip Sync Battle on Sunday 1st May – Tickets £10 each – Doors open at 7:30pm.

Remember that we regularly show lots of sports on the big screens in the bar – from Monday night football, mid-week league, cup and European matches, and weekend GAA and soccer matches through Saturday and Sunday. Come along, support your teams and enjoy the atmosphere.  Match schedule will be advised through social media later this week.