Class is permanent….hamstrings are not!

Dungiven’s 1987 championship winning team played our ‘97 champions at O’Cathain Park on Saturday evening. Arranged by the lads to mark my transplant, it didn’t occur to anyone that the event might put a strain on our already hard pressed organ donation system. 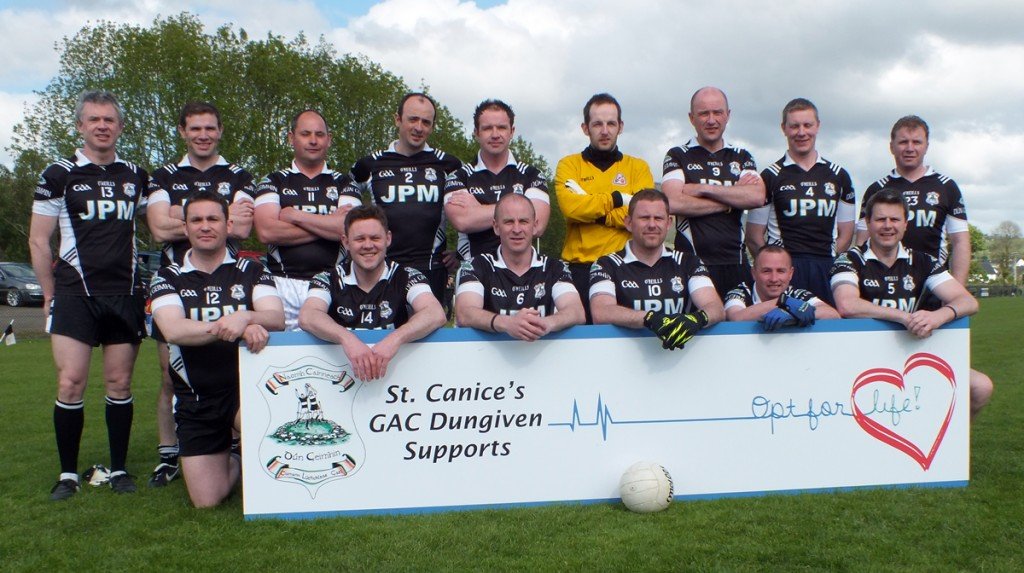 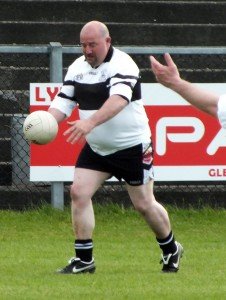 With the grass freshly mown, the sun shining and a good crowd on the terraces, we were suddenly transported back to our youth. I looked down at myself in the black and white and thought, “I’m not in bad shape. Not bad at all.” Out we went onto the field with a spring in the step, laughing and chatting. No warm up. Then the ball was thrown in and the mood changed. The game began with a long ball fired into Mickey McGonigle, who drove his elbow into Kieran McKeever’s throat as the ball was in the air, then plucked it out of the air. He drove it wide, but finishing was never Mickey’s strong suit.

The tone had been set. A few minutes later, after Jimmy Donaghy had assaulted me in mid-air, taking me round the neck and dragging me to the ground, McKeever was moved to roar, “For f*** sake Jimmy take it easy, he only has one kidney.” A warning to which no-one paid the slightest heed.

For the record, in the first half alone three men tore their hamstrings and were escorted from the field. Eugene Kelly put his foot on the gas to go for a ball sprayed towards the sideline only to find that there was no gas. None at all. Instead, he fell over himself and lay in a crumpled heap groaning. 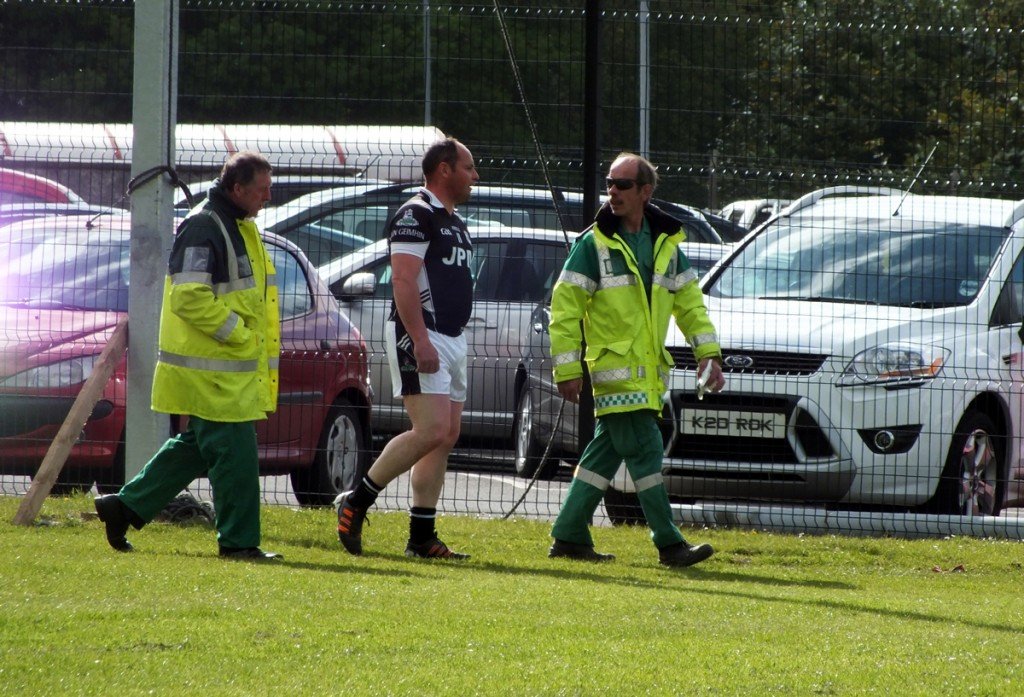 He was carried to the ambulance by the St John’s crew, accompanied by laughter from the field and terraces. 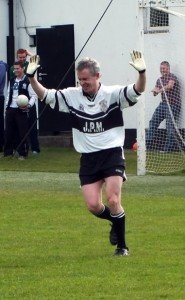 With the final kick of the game, I hit the rigging for the last time at O’Cathain Park. The crowd giggled and shouted good natured insults as I blew my goodbye kisses to the people and place I love.

As a boy, I stood for hours on the 14 near the sidelines, kicking ball after ball after ball. Dreaming of winning senior championships with the club and an All-Ireland for Derry, I usually did a commentary alongside each act. I remember one day after a mazy solo run through imaginary defenders followed by a crisply taken goal into the bottom corner, I looked up to see John Kealey standing at the gate laughing and shaking his head.

“You’re not wise young Brolly,” he said, as I walked back out to the 50’ to do it all again. The seed doesn’t fall far from the tree. A few years ago, when his beloved Granny McCann was still alive, she beckoned me over to our kitchen window to watch my son Rory in the back garden. He was driving the ball into the net, shouting, “Brolly puts it in the rigging”, before wheeling away to blow kisses to the imaginary crowd.

Before the game, Colm McGuigan, the club chairman and my old team mate from the ‘87 championship winning team, presented me with one of St Canice’s new optforlife jerseys, my name on the back. 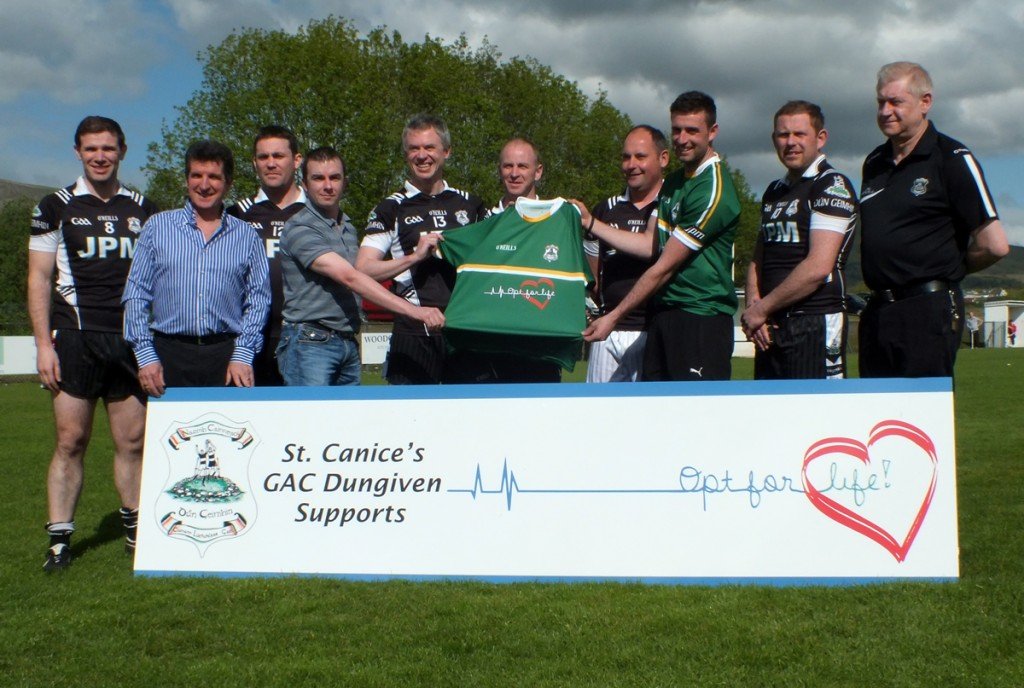 It was in Colm’s car on our way to Ballinascreen for the ‘87 semi-final that I first encountered the longest word in the English language. Brian McGilligan – scrunched up beside me in the back seat of Colm’s Ford Cortina – roared “ Senderonteefucksir” at McGuigan, which in Dungiven means, “Please accelerate”. Every now and again, McGilligan – as was his habit – clipped the front seat passenger (I cannot for the life of me remember who it was) in the ear, just to let him know him know he was there.

“Fun?” said Colm, “Are you f***ing wise Brolly? Championship football’s not about fun. It’s about winning. Shut your mouth unless you’ve something sensible to say.”

“Aye, shut your mouth,” said McGilligan, clipping me on the ear. It was a philosophical argument I struggled with for years, until eventually realising that Big Colm was right. 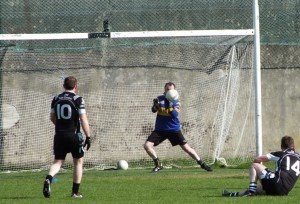 Michael Friel, who was severely disabled after a terrible car crash a quarter of a century ago, took his place in goals for the ‘87 team. It was his first game since his accident. Emerging from St. Pat’s, Maghera as their star keeper, he played on their Hogan team and with Derry minors. After winning his first county medal, disaster struck. He spent months in a coma before slowly recovering. On Saturday, he showed that none of his old instincts were missing. He moved out to narrow the angle, he took up the right positions, he even made a couple of saves. His body no longer obeys his commands (he can no longer kick the ball for example) but his mind is strong as ever.

Afterwards in the clubhouse, I drank a few pints with the boys who built the clubhouse. Boys like Eugene Kelly, Kieran McKeever, the McGonigles, the Mullans and Warty Kelly (possessor of a dummy that Bernie Flynn only dreamed of). Before I left, McKeever presented me with a black wristband with the Irish motto, ‘ ’.

“We’ll wear these until Dungiven win the championship and you have your new organ donor law.” 2014 it is…