Holders Dungiven had ten points to spare at the end of this at times tetchy encounter at Fr. McNally Park, Banagher as they claimed the Harry O’Kane Cup for the third year in succession. 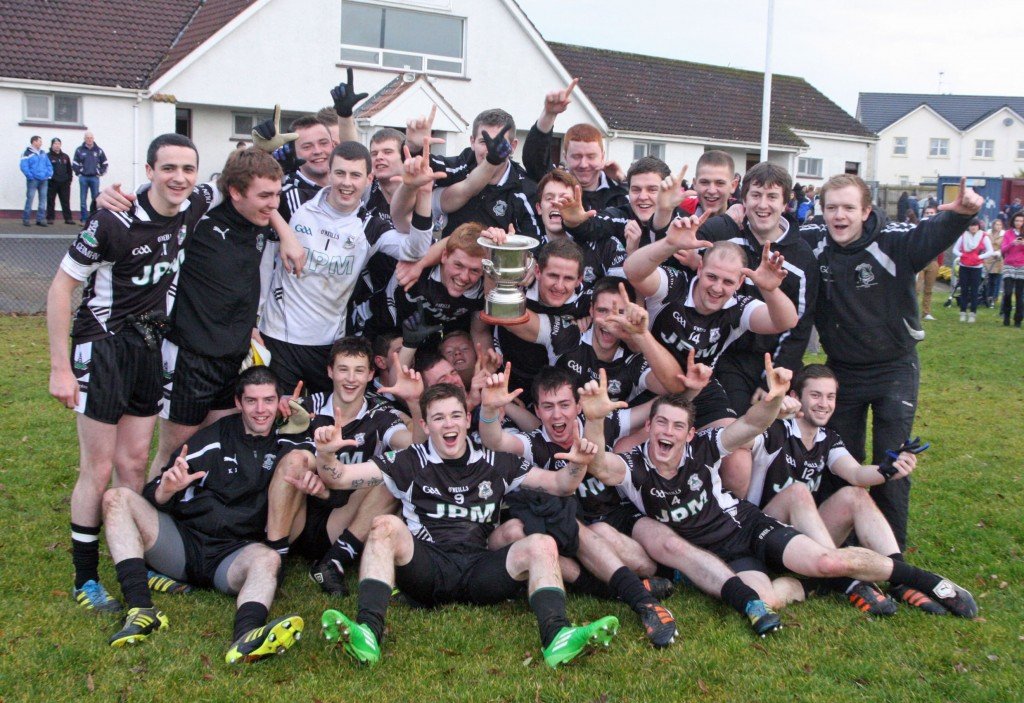 However, while the margin of victory suggests a comfortable victory, nothing could be further from the truth as Claudy dominated for long stretches of the first half and really should have been closer than 2-02 to 0-05 behind at the interval.

Indeed right on half time Ciaran McElhinney had a glorious chance to score to grab a goal for the Mitchel’s, as he bore down on goal one on one with Dungiven keeper Kevin Farren, but he blazed the ball over the bar with the goal at his mercy.

Ten minutes into the half after Claudy had started the livelier with three points, two in two minutes at the start of the game, they carved open the Dungiven defence as Blaine Carlin, Eoin McGahon and the outstanding Conor Johnston put together a string of passes before Shea Kerrigan set his sights on blasting the ball to the net. 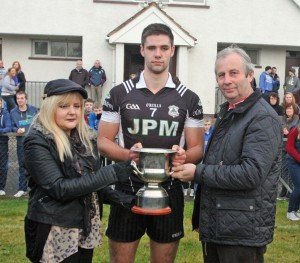 But the equally outstanding Paddy Kelly, who stepped up to the plate when Dungiven were struggling with the pace, energy and slick passing of Claudy, made a full length diving block to divert the ball away from goal and over the end line.

At  that stage the holders moved swiftly to curb Claudy’s runs on goal on the left wing with the introduction of Kevin O’Connor and he too certainly answered the call with a composed display of pacy defence that sealed off that flank for the rest of the game.

In the 13th minute Martin Burke made a telling cross from the left wing that cut out the entire Claudy defence, with Seamus Kealey coasting in on the blindside of defenders to punch the ball powerfully to the roof of the net to tie the scores at 0-03 to 1-00.

Sean O’Neill took a pass from Marty Burke a minute later and set up Sean O’Neill for the lead point and from there the winners were never headed.

Eight minutes from half time Seamus Kealey took a free kick quickly after he’d been fouled and found the unmarked Eoghan Quigg behind the last defender and he showed great coolness to drill the ball low past keeper Aaron Hargan for the second goal and a 2-02 to 0-03 lead.

While Claudy did rally with a couple of points before the short whistle Dungiven had weathered  the Claudy storm and were well positioned to push on for victory in the second half.

Dungiven had decided not to start any of their players who were carrying niggling injuries but, after bringing on Kevin O’Connor in the first half when the defence was struggling with the pace of the Claudy forwards, they then moved to beef up the attack to put the result to bed as quickly as possible in the second half.

Their second substitution also worked a treat as Donal McGilligan had the ball in the net in less than a minute after his half time introduction for 3-02 to 0-05.

By the 38th minute they had plundered three more points in as many minutes, with Paddy Kelly placing Seamus Kelly for the first, Sean O’Neill the provider for Sean O’Kane to land the second and Martin Burke converting a free for the third when Daryl Devine was booked for a rash challenge on Sean O’Neill.

Marty McCloskey was booked for an off the ball foul and James McClay pointed the free for 3-06 to 0-06.

There was then a near ten minute scoring hiatus, with play becoming scrappy and edgy as Dungiven continued to dominate possession, with Tomas Brady almost unplayable in the aerial exchanges in the middle third, well supported by Sean O’Kane and Sean O’Neill.

That Dungiven did not add to their score in this period was down to some poor decision making on the ball and in their distribution, Claudy now lacking the composure to make any headway against a defence where Marty McCloskey, Paddy Kelly, Kevin O’Connor and Kevin Johnston had battened down the hatches in a most secure fashion.

Five minutes from time Claudy were awarded a penalty for a foot-block in the goalmouth and Eoin McGahon hit the target to leave nine points between the teams.

There were a few more rash challenges in the final minutes, with Shea Kerrigan picking up a second yellow card for a foul on Marty Burke.

In the final seconds of the game matters threatened to get out of hand, the referee bringing matters to a close a minute into added time.

Stephen McGuigan, a member of the Dungiven management team, agreed that Dungiven had started badly, “Very poor start and that’s all we talked about during the week, trying not to get off to a bad start. We felt that we were a better side than Claudy but yet we got off to a bad start.

“The talking to them seemed to back-fire on us as we never got into the game until half time. We got them into the dressing room, got them settled down and had a chat with them. “

He outlined some of the problems, “We were not doing the simple things, we were trying to play ‘miracle’ balls and we were turning over possession too easily. But once we had a chat with them during the half time interval about the mistakes, things improved and from then the scoreboard tells its own story.”

I suggested that Dungiven could have been in even greater trouble in the first half as they had a goal chance after ten minutes and then again before the break.

Stephen McGuigan agreed readily, “Absolutely!  Look don’t get me wrong! Claudy are a very good team. There’s eight or nine of those players start in the Claudy senior team. They got off to a good start but once we brought in Kevin O’Connor in defence he made a wile difference as he had a bit of pace and we put up the defensive shutters.”

He added, “Once we got the goal we settled and got a foothold in the game and we took of f from there. “

Dungiven led 2-02 to 0-05 points at half time but the introduction of Donal McGilligan at half time galvanised the attack. He had not started because of injury as Dungiven sought to limit his involvement in this game, also that of Kevin O’Connor and Conor Murphy who have been on the injured list in recent weeks.

“Donal has been in the senior team for the past three years and it’s just unfortunate that he has that niggling injury and we cannot get the full use out of him. He came on and with his first touch he got a goal  and we were able to take him off again midway through the half when the game was over. We can now rest him for the county final. ”

I suggested that the first half performance would not win the county final, no matter which of the three teams came through the other half of the competition and he agreed, “I said as much to Eugene (Kelly) and Seoirse (McGonigle) just before the final whistle. We know that we have a lot of work to do before the final in two weeks. But we’re in the final on merit. We deserved to win that game but we were not at our best.”

After the game Ciara O’Kane, daughter of Danny and granddaughter of the late Harry O’Kane, in the presence of other members of the O’Kane family and Derry CCC chairman Michael McCracken presented the Harry O’Kane Cup to Dungiven captain Sean O’Kane.