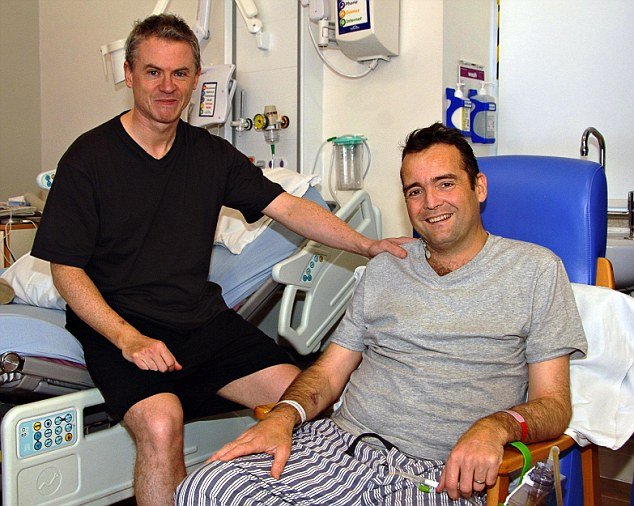 Former Dungiven and Derry  All Star Football Joe Brolly last night revealed why he made the incredible decision to donate a kidney to a man he had known for only just over a year.

Fighting back tears, the father of five said he had instantly agreed to give PR executive Shane Finnegan, 40, the chance of a new life because he had been helpless to save his cousin who died weeks after a lung transplant.

The Irish Mail on Sunday columnist said his remarkable offer was a chance of saving at least one family from suffering the same pain.

Former All-Ireland winner Brolly said he had not hesitated to make the offer of a donation when he realised Mr Finnegan – his U-10 coaching colleague at St Brigid’s GAA Club in Belfast – was seriously ill.

‘Shane was very ill. From his perspective he was at the end of the road and he had no other option,’ he said.

‘I would have known Shane’s brother Donagh – he was a superb Gaelic footballer for Antrim.

‘I met Shane about a year ago but I didn’t know at that stage that he was one of those Finnegans,’ the top barrister added.

‘I knew he was sick and I said, “Look, I’ll give you a kidney.” I’m pretty straightforward. It just seemed to me to make sense.

‘It was a long shot. It was only when it became a possibility, this pioneering surgery in Guys in London, that the whole process became serious. There was a lot of sneaking around, going to hospitals.’

Former Derry county star Brolly explained how it was the death of his cousin that had inspired his extraor­dinary sacrifice.

‘I was very, very keen on it because last year, my cousin Catherine, who was a beautiful girl and was the same age as me and she married Danny Quinn, who played on the same Derry team as me, died,’ he said.

‘Danny is a very close friend of mine and Catherine, who was a lovely Irish dancer and all that, some years ago her lungs started to seize up and then, within the last two years, she had a lung transplant.

‘She had great love in her life. She had three children but looking in from the outside, her quality of life was very poor for very many years.

‘And Danny had to always carry an oxygen cylinder.

‘She died pretty quickly. She was so beautiful… there wouldn’t be a day I don’t think of it,’ he added.

‘It was very devastating for Danny and for the kids. They had been given the hope of the transplant.

‘It is still very devastating when you see the damage that it causes and the pain it causes too within the family.

‘For young children… those children are so well, looked after and all, but it’s very, very difficult.’ 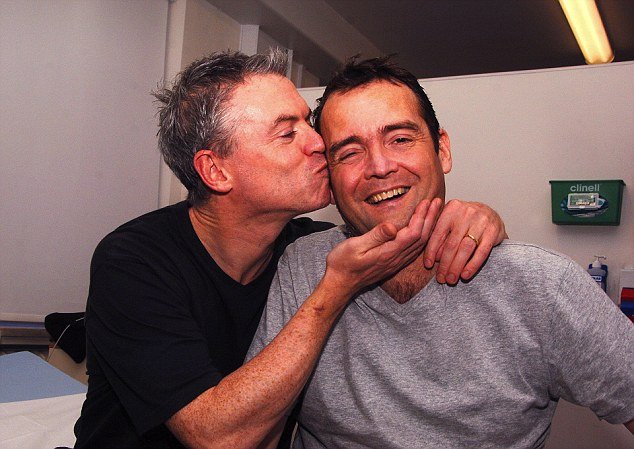 The outspoken TV pundit and columnist also revealed how his family’s decision to look after a niece when her mother died from cancer heavily influenced his thinking.

‘I’ve always liked the saying, “Save a life, save the world”,’ explained Joe.

‘We’ve got five children and they are under 12. My wife’s sister Brigid died of breast cancer so my niece has lived with us for the past three or four years.

‘She has come through all of that. She has done terribly well and she is a grown woman now. She’s 19 years old and in the full of her health.’

‘As you get older, you look around you a bit more. When I was a young man, I was just like a Jack Russell. You are absorbed with your own life. You don’t see the world around you.

‘But when you have children and all that, you start to appreciate the world beyond your nose.

‘And I think the GAA is really good for that. There’s a real strong sense of community and family connection and all of that.’

The Derry star said he had been deeply touched by the story of Máire and Brian McKeever, and their son, Brian Óg, who had played with the Derry minor team.

‘He was a high flyer and he developed leukaemia and Máire asked me to visit him and I visited him and he had a bone marrow transplant,’ said Joe.

‘His brother donated his bone marrow and it was a success.

‘I got tickets for the All-Ireland football final and he went to the All-Ireland. He was great. Then again, within a few weeks, the transplant failed and he died.

‘That happened three years ago.

‘I thought if the Finnegans wouldn’t have to go through that pain… it was a no brainer. And if you lead a healthy lifestyle, you only need one kidney.’

Brolly insists he never had any second thoughts about donating a kidney, at any stage of the ­process. And he insists that instead of being shocked when doctors informed him he was the perfect match, he was elated.

He said: ‘I know it’s totally irrational but I always felt that would be the case.

‘I was always very relaxed about it and I would have been devastated if for some reason it didn’t go ahead.

‘It’s a rare opportunity to be told that you have a person’s life in your hands.

‘I would have been stunned if it was not a perfect match. I’m so euphoric.’

Despite the gravity of the operation, there have been many lighthearted moments in the ward they are now sharing at Guy’s Hospital. Recalling how he was mistaken for Shane’s father, Brolly said: ‘A man came over to me and said, “This is a beautiful thing you are doing, giving your kidney to your son.”

Doctors have informed the two patients that the new kidney is working perfectly, so the prospects of father of three Shane now making a full recovery are good.

‘Shane really has been very ill and, already, he looks brilliant,’ said Brolly.

However, Joe is quick to dismiss himself as a saint. He said: ‘I feel just brilliant and Shane has a fully functioning kidney. I don’t feel one bit saintly. I’m not saintly material.

‘I’m just ecstatic to be able to do this.’

‘I hear that you need a kidney. Let me help…’

The man who received Joe Brolly’s kidney yesterday spoke of his astonishment at the gesture by his fellow junior GAA coach.

Shane Finnegan, 40, had never played alongside the All-Ireland-winning star, and the pair met for the first time just 18 months ago.

PR executive Shane, who has a wife and three children, says he is still stunned by Joe’s altruism.

‘It’s truly outstanding,’ he said. ‘This altruism, sacrificial generosity. Joe is a tower of strength: his compassionate nature is honestly second to none. It’s not only the donations. It’s his compassion. He had no concern for himself.

‘I’ll never get over it. Joe is like a brother to me now… it’s as simple as that.

‘He is so compassionate, you just would not believe it. Through the whole process and transplant his only consideration was for me.

‘I have never ever encountered a more selfless person in my life. That’s all I can say.’

Incredibly, the pair first met just a year and a half ago on the sidelines of their local St Brigid’s club in Belfast: both men were coaching the U-10 side on which their sons play football.

After Derry star Joe, 43, noticed Shane resting during training sessions, he found out that his fellow coach had renal failure and was on dialysis.

Shane went on, ‘Joe approached me one Sunday morning and said, “What’s this I hear – you need a kidney? I’ll give you a kidney,” were his exact words.

‘Then he ran over to the kids and said, “Ye’re bunching together like sheep, spread out…’ and that’s how it came about.

‘I had no idea he knew that I had renal failure. It wasn’t something that I broadcast. I work and I do dialysis three nights a week after work so it’s a part of my life that not many people know about.’

As generous as barrister Joe’s offer was, there was no guarantee that the operation would go ahead: Shane had undergone an earlier kidney transplant but his body had later rejected the organ.

‘I am very difficult to match because I am 98% incompatible and have antibodies from the previous transplant,’ the PR man explained. ‘I thought nothing would come of it. Joe drove the process from the start and his determination saw it through.

‘He was determined from the outset that this would happen.’

Earlier this year, doctors tested a number of individuals – including Shane’s wife, Catherine, and his two brothers Greg and Donagh – to find the best ‘match’. But, by the spring, it became clear that it was the former Derry right corner forward – and Irish Mail on Sunday columnist – who was most suited to the operation.

Even at that stage, Shane was cautious: just months before, his sister, Siobhán, had been lined up to donate her own kidney.

‘Then, coming up to Christmas, she broke her ankle,’ said Shane. She had clots and then she was ruled out. It was tough and it was particularly tough for Siobhán because she was so committed. It was a setback.’

By this year, the stakes were getting uncomfortably high for the father-of-three. ‘I was getting weaker and the last few years were tough. It’s hard leaving your wife and children three nights a week to have dialysis for four hours. I was able to work because with a young family, I had to. The dialysis is tiring but I just had to get on with it.’

Both men faced tests and procedures to give Shane the best chance of accepting his donor’s healthy kidney. 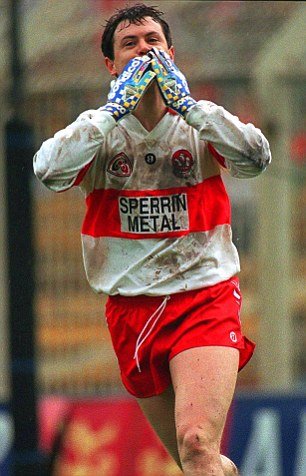 Brolly in his playing days with Derry

The operation took place on Wednesday. ‘Joe was the first to go down (to theatre) because they had to take his kidney out. We were in a shared ward and we high-fived before he went.

‘My wife was there and Joe said “No crying, you!” And then he said to me, “It’s not every day you get a kidney from an All-Ireland medal winner.”

‘I find it hard to pray for myself. I pray for my children and my family. But that day there were people all over Ireland praying for me. I was calm. I suppose having gone through it before I knew what to expect.’

Yesterday the prayers were answered as the men were informed that the transplanted kidney was functioning well – and doctors are optimistic about Shane’s prospects of making a complete recovery.

‘(The doctors) are very happy at this early stage. The creatinine levels are very good which is a key reading of renal function.

‘Joe says it’s because I’ve received the Taj Mahal of ­kidneys,’ said Shane. ‘Would you expect him to say anything else?’